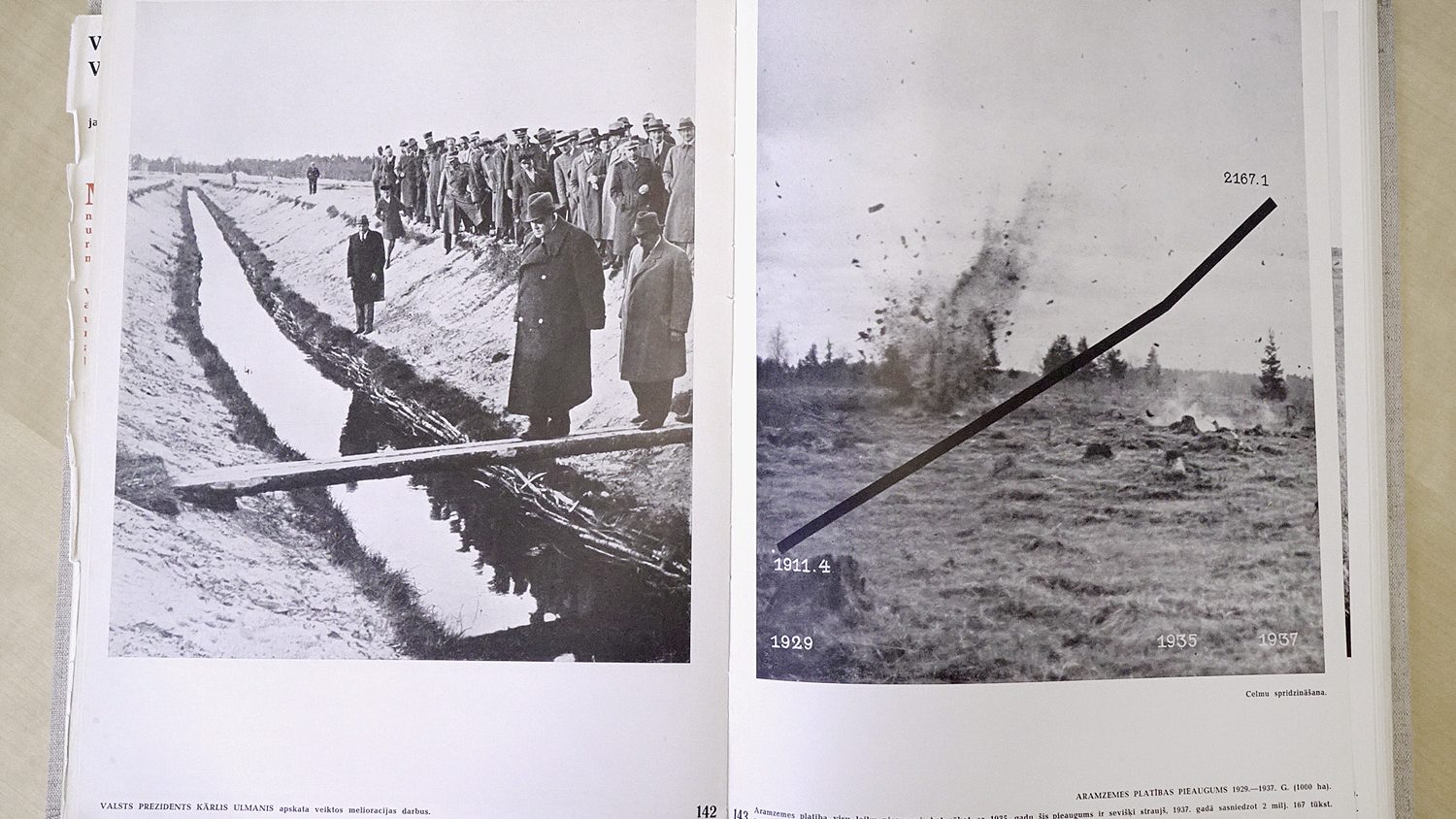 In the inter-war period in Latvia two types of photography books were dominant – landscape and city albums, as well as ideological albums, which either praised and commemorated the battles for independence or honoured politicians and glorified the existing political system. The album Pieci gadi (Five Years) issued in 1939 belongs to the last group. It was created to commemorate the five years anniversary of the coup d’état implemented by the leader of the state Kārlis Ulmanis (1877-1942).

The book is voluminous – it consists of 238 pages. It is hardcover and looks very presentable. There are two editors: one of them is the writer, ex secretary of Ulmanis and long-term manager of the state telegraph agency LETA Rihards Bērziņš-Valdess and the other is artist illustrator Sigismunds Vidbergs. The publisher of the book is the state publishing house Pagalms, which in the 1930s mostly issued patriotic literature and a few landscape photography books. The authors of the photographs have not been indicated, but it is very likely that they were LETA photographers.

The book is introduced with Ulmanis’s speech (“I see the people united [..] for a single aim, a single task for happiness [..]”), which is followed by archive materials from the events of the coup – the government manifest of Ulmanis and his ally General Jānis Balodis with the motives of coup and promises of better future, Ulmanis’s speech to general public after the coup, as well as other archival materials, which gradually merge with “positive messages” on the arrival of a better future – starting with the army and ending with the public health. The improvement of life quality is attested by tables and progressive curves of numbers that have been formatted on the photographs. Although mostly the photographs and collages have been used as illustrations for the texts about the development of the state in various industries, almost 40 pages at the end of the book are dedicated only to images. This section starts with a leader, who is visiting a crafts exhibition. It is followed by some photographs with national elements (The Museum of Ethnography). Afterwards the achievements are presented – the buildings, bridges, and factories built in the recent years, as well as some images in the reportage style showing productive farmers in action. The section ends with some lyrical images depicting countryside landscapes and some touching final images – masses in the Festival of Harvest in Koknese listening to the leader’s speech and masses in the Song Festival, thus merging politics with folklore and strengthening the role of the leader in the identity of the nation with the rituals corresponding to the leaders of the time and using the respective propaganda methods. It all ends with an image of the phallic Monument of Freedom.

Similarly to many European countries, in Latvia, too, the coup implemented by the President of Ministers Kārlis Ulmanis on 15 May 1934 made democracy fall in favour of the authoritarian regime, yet this contradictious period of time is still being associated with the “golden age” of Latvia. No doubt, this album is also one of the instruments, which provided and is still providing a positive impression of the “leader” and the politics implemented by him. Contrary to other albums of that period, for instance, Latvijas pastāvības 10 gadi (10 Years of Latvia; 1928) and Latvijas pilsētas valsts 20 gados (The Cities of Latvia in 20 Years of the State; 1938), Pieci gadi (Five Years) stands out with innovative photographic montages, graphical collages, and the use of numbers and slogans, thus becoming an impressive instrument of propaganda that was used to leave an impact on the national awareness. 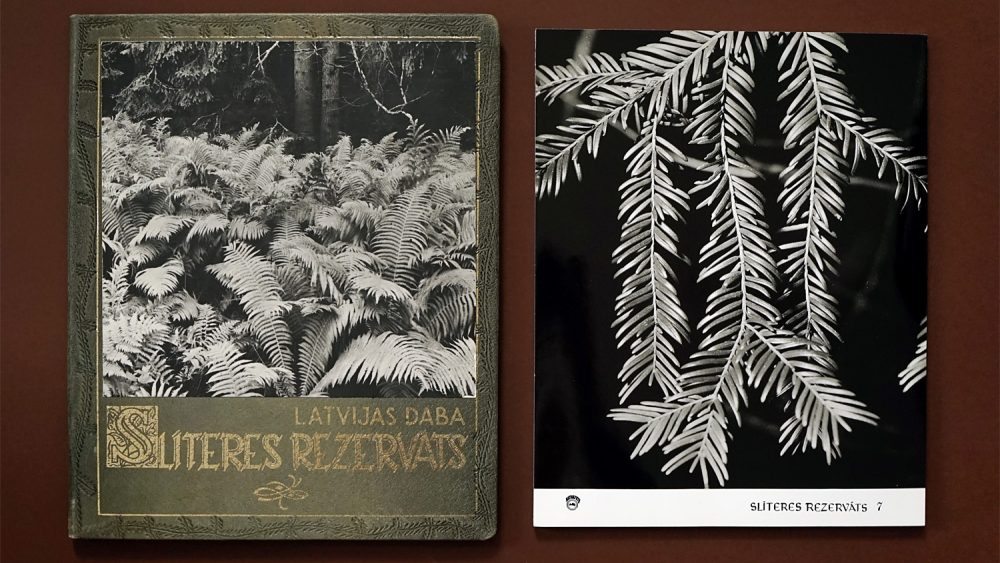 FK is continuing to introduce the most interesting photography books published in Latvia in the previous century. 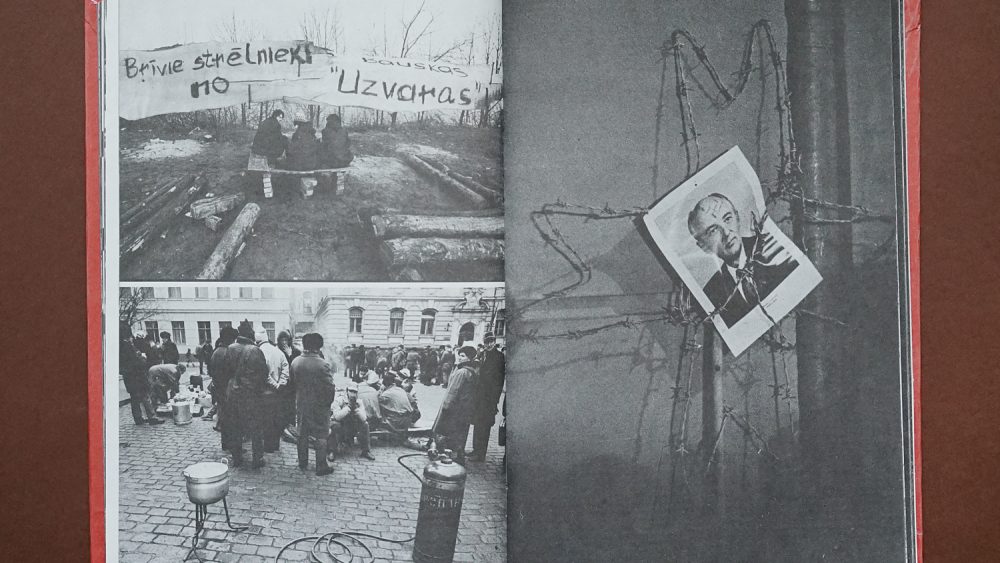 The photobook that depicts the events on the barricades in January 1991. 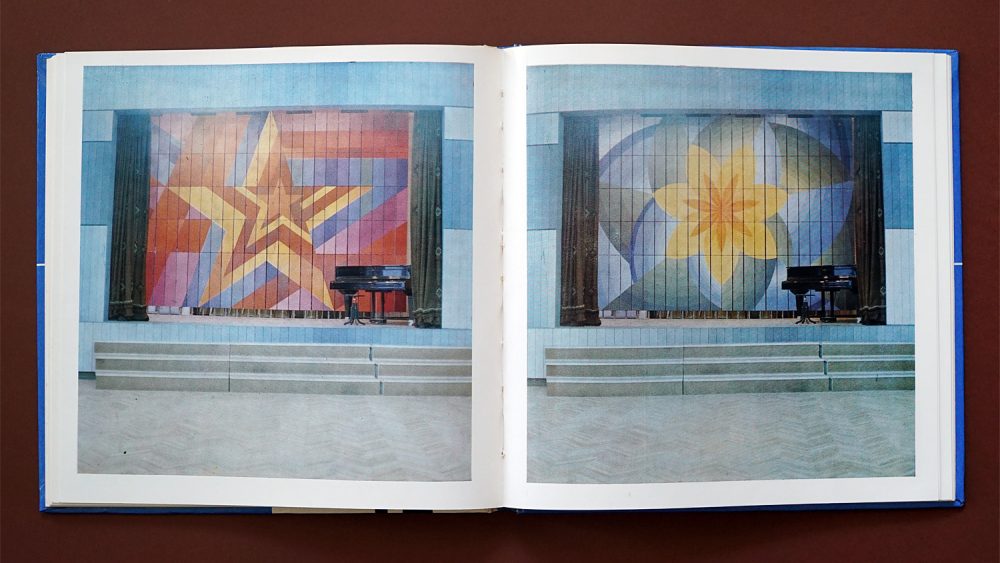 Introducing a photobook that documents the visual manifestations of Soviet propaganda in public space.